Here are the roleplays in club penguin which have been influenced or has some part of preppy behaviour in it. Most common roleplays to be seen are of pukies, mumus, shop managers, waiters, biggys, half-preps, emos etc.

Pukies or Pookshits are idiots who roleplays in Club Penguin as they failed to "acts" like a baby' but in reality they mock real life babies and orphans. The main goal is to get killed by the best "mumu" that is their mom (mumus are also idiots), also they try to be cringy and very cancerous. All Pukies are rude; especially to their "wistas" who are their big sisters and very rarely they are rude to their mumus. Usually if a Pukie doesn't like a place, it goes back to the Pet Shop in order to get killed and tortured to death. They hardly stay for being beated in their aggressors' igloo. Pukies are known to be the major cancerous roleplays in Club Penguin but also being the less popular type of roleplay to be used and being the creatures to be the most killed in CP. They speak everytime with a 'w' in their sentence like 'Hwi!' or Wello' to look like cringy babies but real life babies DO NOT speak like this at all. They claim they are poor and hungry, while they survived for months without food and they have rich clothes, mocking orphans in real life.

Some Pukies act just like preps..they act rich and spoiled but a preppy mom would only adopt such a Pukie. It is observed that Prep Pukies are even more cancerous than normal ones. They act like preps so when they usually grow, they tend to become cancerous. They are usually picked by a rich mumu as stated before. They say things like preps, quite is now really weird to see that Preppy Pookies are now sitting with preps in the Stadium but they were destroyed and killed by many heroes who saved the Stadium.

Mumus are the "mothers" in Club Penguin of Pukies. They are usually found in the Pet Shop looking for the best Pukie. They usually pick cuddly and cute ones (aka cringiest and most cancerous ones). Mumus usually even pick the Pukie with their wistas. An average mumu will be having at least 4 Pukies, which is asy to kill them all! Mumus usually wear The Sidetied and other preppy type look but they usually wear a big gown to show they are retarded. Some mumus are Pookie Abusers and be very good till that Pookies tries to leave but fails in ending up being beated to death or even raped. Usually these kind of mumus are great heroes and kills the other stupid mumus. They usually hold Pukie Contests and adoption centers in their igloo. Mumus arent good at all, just mocking real life mothers.

The preppy mumus are very poor but even worst: they are unlikely to spoil the Pukies and make them like preps though. They make a dramatic entrance by saying things like: "Comes out of broken and rotten limo!" Or "Red carpet burns!" Or "Waves at nobody!". This quote is used to make Pookies crowd around that mumu because they think that mumu is very stupid and poor. That mumu is usually very choosy and take rare or cute ones. Those mumus have the exact same type of behaviour as the preps. They say quotes of preps like: "Scans Room with chocolate poop eyes!" Or "Looks for Perfect Cancerous Pukie!" Etc. they are supposed to be the idol mom to a Pukie. Preppy mumus are actually worst than preps.

Biggy are the big sisters in CP, they usually tend to be preppy but very caring for their little sister/Brother. Preps usually become biggies but it isn't necessary. But Biggy is decided by the mumu. Usually biggies are picked who are looking "cool" or looking very modern and stylish. They are kind people but some AREN'T preppy. usually they are preppy but very rare aren't. The basic perspective is that they are preps who has little sisters/Brothers. As cancerous beings, they are quite ugly and easy to kill.

Some preps who really want to show off a lot act like celebrities. Celebrity Preps often have a Limo or a BMW. Preps usually act like their favorite singers such as Miley Cyrus and Taylor Swift.They use quotes like "Red Carpet Rolls!" and "Walks Stylishly out of golden BMW/Limo!".

Celebrity Preps are really annoying as they just act as if they are the boss.

Some preps think they should get rid of Half-Preps since they want to be 100% prep.Since Half Preps support Emos (usually), Many preps are against them since they are against Emos.

Emos are penguins who wear hoodies and usually say acronyms. Some of them are against preps.Preps think they should get rid of them. Emos say "Prep Alert!" when a prep comes. Though they look like preps, they are like us who hate preps

Some roleplays are affected like waiters, shop keeps and lots more. Some preps do occupation and act like a prep. Other occupations roleplays also this happens. 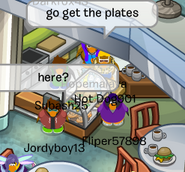 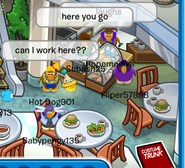 Another group of preps working at the Puffle Berry Mall.

Preps at the Puffle Berry Mall. Note the Pukie at the left will be soon being raped and killed behind the plants.
Add a photo to this gallery
Retrieved from "https://aprepr.fandom.com/wiki/Roleplays_influenced_by_preps?oldid=6360"
Community content is available under CC-BY-SA unless otherwise noted.